Celox™ granules is easy to use, just pour, pack and apply pressure. When mixed with blood, Celox™ forms a robust gel like clot in 30 seconds. (For major arterial hemorrhage, maintain pressure for 3 - 5 minutes to ensure hemorrhage is controlled). It works independently of the bodies normal clotting processes. Celox's™ clotting ability has been proven to work in the cold (hypothermia) or in the presence of common anti-coagulants such as "Warfarin". It generates no heat and will not burn the casualty or care giver. In clinical test by the U.S. Navy, Celox™ was the only product to give 100% survival. It gave a strong stable MAP (mean arterial blood pressure) and was also the only product to give robust clotting with no re-bleeding. Celox's™ safety has been tested to the intense class 3 CE mark standards. Celox™ is made with chitosan. Chitosan is broken down by lysozyme, a human enzyme, to leave glucosamine, a sugar which is normally found in the body.

CELOX™ GRANULES HEMOSTAT HAS BEEN SHOWN TO:

CELOX™ GRANULES HEMOSTAT IS SUITABLE FOR: 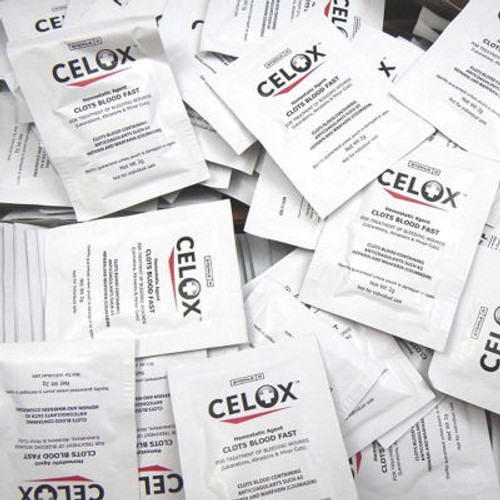